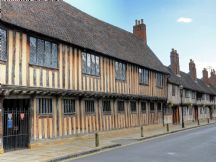 We’re very excited to have been appointed by the trustees of The King Edward VI School in Stratford upon Avon to open Shakespeare’s Schoolroom and Guildhall to the public. The Schoolroom and Guildhall is in the heart of Stratford not far from his birthplace and The Royal Shakespeare Company.  It is an extraordinary building where Shakespeare received his education as a child, possibly from seven years of age, and has remained in use as a school since 1553. It is