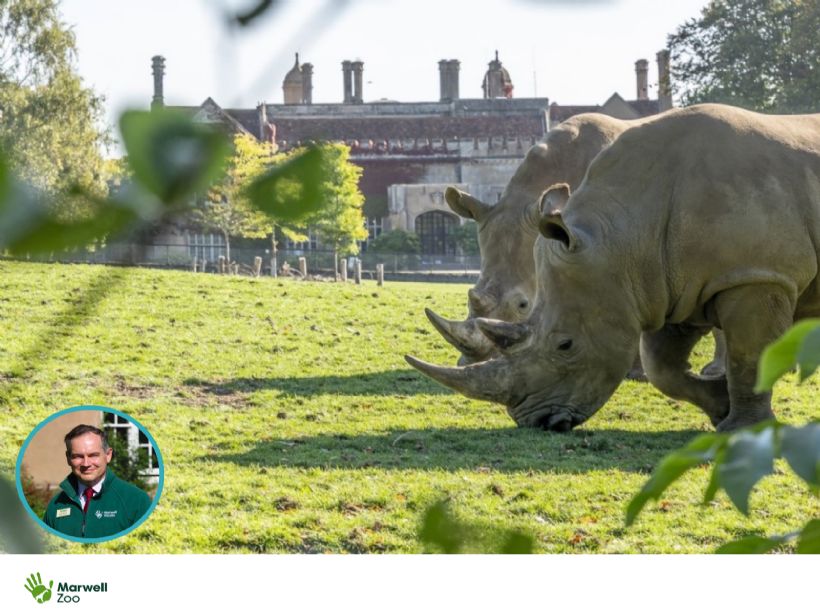 After kicking off the Emerging Stronger series by hearing from two young, but determined organisations finding their feet amidst a global pandemic, episode three has us hearing from a more experienced member of our industry, Marwell Zoo.

Sean Mannie, Commercial Director of Marwell Zoo, gave us an honest and exhilarating account of the learnings he took when the zoo closed its doors to the public whilst still incurring animal welfare costs of hundreds of thousands of pounds per month.

Here's what Sean kindly shared with us...

What did the pandemic teach your organisation about itself?

It's actually a couple of things rather than one thing in particular. For me, the first one is I'm really lucky to be in an organisation that has enough maturity and confidence to do what was right for us at the time, rather than being led too much externally. For example, we actually closed down before we were instructed to do so. We actually took a decision a few days beforehand, with the way the situation was developing, knowing that it was the right approach for us, for our staff, for our guests, and to think about their welfare rather than the bottom line.

“I'm really lucky to be in an organisation that has enough maturity and confidence to do what was right for us at the time, rather than being led too much externally”

So that's what we did. And we were actually one the first of the main zoos in the country to announce we were closing down, and to do it. So that was encouraging. The same came with reopening, at the end of the first lockdown. Rather than opening on the day that we could, we actually decided that we needed a bit more time. We could have opened, but we wanted to make sure that we'd got everything right and in the best possible place before we took that decision.

It wasn't long, but we took a little bit of extra time, and that enabled us to finish the planning, which again, has made such a difference, particularly at the first lockdown. Each team took the time to think carefully about what decisions we wanted to take, what measures we wanted to take, and also then what impacts that would have. What was the impact that would have on our guests, what impact it would have on the staff. We were able to change that planning accordingly and therefore maybe take some different decisions that we might otherwise have done, that actually worked out for us very well. So, for example, we, like many other zoos, aquariums, and attractions as well within the wider industry, went to pre-booking, pretty much 100% pre-booking, which was a complete reversal of where we have been in the past. We decided, actually, we went for a very short lead time, so our guests were only able to book a few days ahead rather than weeks or months. That was the decision for us. It worked really well, and it meant that we were able to have a better control of the situation, we were able to allocate tickets more fairly, we made sure that we maintained a full capacity - so in essence, pretty much every ticket we sold actually resulted in someone coming in through the gates, and that made a big difference. We treated members and paying guests equally. We made sure that we didn't disadvantage either, to try and keep everybody as happy as possible. That also meant that from a staffing point of view, that helped our staff, and it meant that if the guests were happier and not stressed, that meant that our staff had an easier working time.

So that whole thing about planning and making our own decisions for our own situation, rather than following a crowd, if you like or the common consensus, actually work really well for us. The other thing that I think it taught our organisation and it wasn't so much taught, but maybe reaffirmed, is just what amazing people we've got. Unlike many industries that were affected, Zoos and aquariums can't just switch the lights off, lock the doors, go home on furlough and wait for an update. We've still got hundreds of animals here that have no idea there's a pandemic going on. They still need the same care they get every other day of the year. So we have a very large body of staff here, our animal care teams, our keepers, veterinary doctors and vet nurses who basically didn't have a pandemic in that way. They just still had to turn up for work in the same way every single day, all through all three lockdowns, at a cost of the organisation of hundreds of thousands of pounds a month, when there was no income coming in. But that's what we needed to do. That's pretty much what all zoos and aquariums did, we all had to do the same thing, we still got to providing the same levels of animal welfare. We had one team of people who just had to get on and keep going as best they could. We then had teams who were either fully furloughed or working part time. It's the way that everybody pulled together. Everybody understood the situation, they understood the impacts on them personally, for their teams, and for the organisation. Everybody wanted to do the right thing.

“It's the way that everybody pulled together. Everybody understood the situation, they understood the impacts on them personally, for their teams, and for the organisation”

That even transmitted all the way up to our trustees, who obviously normally we tend to see for committees and board meetings. But actually, we were speaking with trustees every two weeks, all through the lockdown, and they were hugely supportive in just supporting the teams getting through and making it through that first lockdown when, frankly, all of us were on a big learning curve.

What did the pandemic teach your organisation about its audience?

Again, I think this was a reinforcement of something that was always there rather than a new thing. For me, the audience is complex. Our audience is not a simple, homogeneous thing. It's a complex organism and it's got different needs and drivers, so you can't take a single approach on anything and expect it to suit everyone. That was very much reinforced and part of our thinking when we were planning for reopening after the first lockdown and was absolutely proved once we reopened.

“Our audience is not a simple, homogeneous thing. It's a complex organism and it's got different needs and drivers, so you can't take a single approach on anything and expect it to suit everyone”

So whether we're talking about the dynamic between paying day guests, i.e those people who just want to come in for a single visit and book tickets, or our members or annual pass-holders who have made an initial investment and then can come in. They're not the same thing, and they have different reasons for coming in, and they have a different visiting dynamic. You've got to make sure that your approach works, as much as it can do, for both. Again, we want to avoid situations where there is a perception that one market is being given preferential treatment over the other.

It's really important that you make sure members and annual pass-holders know how valued they are because they're ongoing support. But at the same time, obviously there is that need to actually start pulling in new ticket income as well and making sure that you can make the two halves work well together. That's not always as easy as it sounds and needs quite a bit of thought. Also, then once you've actually got your guests on site - again, different dynamics. I can't tell you how many conversations I had with guests within the space of ten minutes where one guest would be saying "It's fantastic the way that you've sort of got everything controlled, you're not overcrowding the place, you've got all your covid measures in place, and I feel really safe and it's great". Then five minutes later you might be having a conversation with a guest who, because there was another human being within 30ft, would start to feel quite nervous and actually felt that the place was crowded. Everybody's going to bring their own perceptions, their own biases in, you can't do everything for everybody. But it was a good reminder of the fact that no single approach will suit. You've got to think about your audiences, and segment those audiences, and understand what their needs, wants and desires are and try and make as much allowance as you can for that, both when you're planning, but also actually, once you're live, no plan lasts once you're actually doing something. Plans go out the windows, you've got to deal with what's happening on the ground, but it helps to guide your decision making because you've already thought about it. That way you're making less up on the hoof.

What's the most important lockdown lesson your organisation
learned that
will serve you into 2022 and beyond?

I remember conversations we were having during lockdown one when you had to make an assumption right from the start that we're going to be reopening again at some point. So working on those plans I think we kept one thing very clear in our minds right from the start. That was 'put the guest first and the money will follow'. It is very easy, particularly for an organisation where you can't just control cost by locking the doors, putting the lights out, everybody going home and just sort of going into hibernation.

“Put the guest first and the money will follow”

As I mentioned, we were still, along with every other zoo and aquarium in the country, paying out very, very large sums of money every month, both in terms of staffing, and animal feed, and animal welfare to keep that going throughout. So obviously there's a big prerogative to get open, get some cash flowing and that can drive a mindset that 'actually we've got to get the cash in. The cash has got to come first. Whatever you do, get as many folks in, get the cash rolling as quick as you can'. That's completely understandable, and in many environments is maybe an absolutely understandable approach. We took an approach to actually get the guest experience right, both in terms of obviously the actual zoo visit, but also their safety. That will make a much happier environment for the guest, it will make a much better working environment for our staff because they are dealing with the positive side of a guest visit, rather than complaints and moans and concerns. So guests feel safer, they're having a great time, therefore, they're not thinking about their safety so much, they're focusing on the experience of seeing these amazing animals in this incredible setting. Staff are concentrating on the positive side of dealing with guests. All of that will generate great visit experience, goodwill, repeat visits, great word of mouth, and higher secondary spend, all of which means that basically, if you do it that way round, you end up being becoming a positive place to visit, a great experience, even with all the controls and restrictions in place and the money will then surely follow. For us again, I can only talk about our own particular experience, that's what we did. It worked well for us, and continues to work well for us now, even this year, and we're still seeing the effects of that.