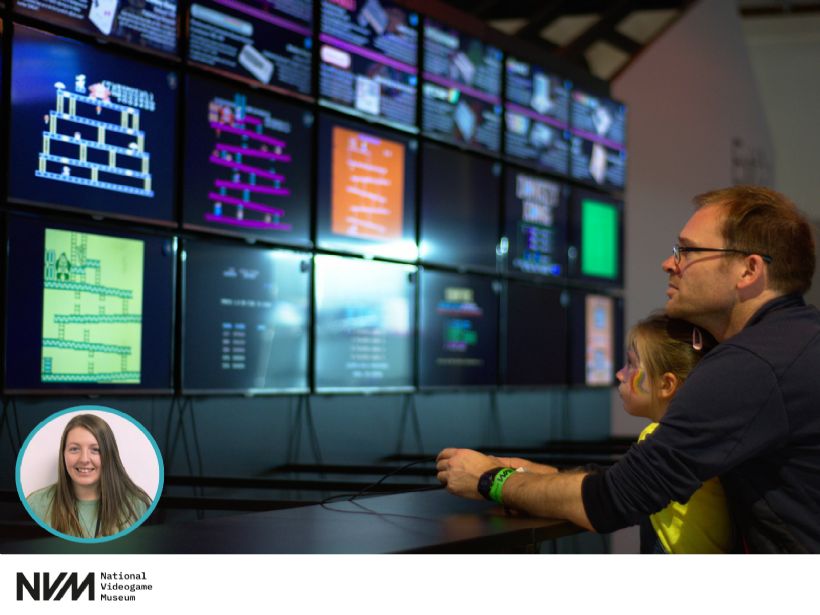 It has been a tough 18 months for our sector - from intermittent lockdowns to extra restrictions, everyone has felt the pinch in some way or another.

Having worked with over 50 visitor attractions in some capacity during this period, we’ve seen first-hand the complex and unique struggles each individual organisation has faced, but we’ve also seen bold experimentation and lasting positive change.

In our new mini-series, Emerging Stronger, we catch-up with our past clients and friends to explore the things covid has taught their organisation about itself, its audience, and its future.

Where better to start than the National Videogame Museum - a young, but bold museum enjoying fast growth in their first years after opening their doors, only to be forced to close in March 2020.

Having been appointed as Director of Visitor Experience in the midst of the pandemic, Hannah Bryan, who speaks with us today, saw firsthand how the organisation and its audience reacted to the changing phases of lockdown.

Hannah kindly shared with us how the pandemic helped the museum to value its internal team, gain confidence from their audience’s outpouring of support, and pivot into the remote digital space.

Here's what Hannah kindly shared with us...

What did the pandemic teach your organisation about itself?

We used the pandemic as an opportunity, when all the day-to-day wasn't happening, to get people together and really think about our strategy. We're about to announce that soon, but we used that time as an opportunity for a moment of pause and to really dig down into why we're here and what we're doing, so we can communicate that in the most effective way possible. I think the thing it really taught me is how much this organisation values its people, and that the safety of our people is absolutely paramount.

It was really lovely and reassuring to join an organisation who had taken the decision to close before lockdown was announced back in March 2020 and to go actually “this is the risk to our staff, let's protect them first and foremost”. This actually meant we were a week ahead of everybody else in that decision, meaning that we could get our crowdfunding out a week ahead of everybody else, and then the communities that support us were able to respond to that.

That was the right thing to do. It was lovely to come into the organisation in the wake of that. But also to realise how agile a small company could be. The idea that our trustees could make a call, whatever week in March it was, and two weeks later have a crowdfunding campaign out because everybody's literally dropped what they were doing and put their efforts towards this digital offer and focusing on this fundraising effort was amazing. That's really agile for a museum and it’s really amazing to join a small team that had that dynamism.

So I think what I've seen after joining is a team that's really banded together and it's really worked hard to make sure we're all going in the same direction. That was around survival. But we did absolutely pivot to use the keyword. I think what was amazing was to do all that alongside then trying to provide for the community. Our marketing and learning officers pulled out an amazing digital programme called ‘PixelHeads’, which was like a series of offers and summer club of doing digital offers to help with home learning. It’s now award-winning, it won the Kids in Museums Award, which was fantastic to have that effort recognised. That's not a thing I think you find across lots of spaces, that's not a thing we've done before, even though we're a videogame museum, we hadn't really had a digital offer - we very much say "Great, what can we do? How do we make it work? What are the tools available for us?". That's not to miss the emphasis on the team that weren't working on this online delivery, who were busy scanning every bit of guidance to work out how to get us back open again.

We did tentatively open for a bit of August through to October period, but for those who don't know, we're being a videogame museum, most of our exhibits are playable. You're actually going in and playing the games and interacting with them. That means every visitor is coming in and touching the same controller. That's not a covid safe environment. So we had to work really hard with our other measures - spacing things out, and providing more hand sanitiser than you can imagine to find our way to mitigate risk in other ways and make sure that when we were opening, we were doing so in a way that is still safe for our staff. They're the ones that are in there day in and day out interacting with the public. They're the ones who are facing that on a day-to-day basis.

It's not me sitting in an office making a decision. I'm not the one putting myself at risk, it's them. We need to make sure that they feel utterly safe and comfortable delivering the experience that they do.

What did the pandemic teach your organisation about its audience?

That they're amazingly committed! We started our crowdfunding back at the end of March, start of April, and we put out for I think about three or four months worth of operating costs, and the response we got back beat that by like two hundred and thirty percent. We more than doubled our target to try and stay open. I mean, circumstantially, we were closed for longer than that. So actually, it was really useful, but it was amazing to have people quite literally put their money where their mouth is and come out and say “actually, this is something that needs to exist, that needs to be here to represent that part of British history”.

“We put out for three or four months of operating costs and the response we got back beat that by two hundred and thirty percent. We more than doubled our target to try and stay open”

I think it was amazing not only to have a large number of direct donors who said “Yes, I believe in this cause, here's what I want to do”, but also to have people who then ran their own fundraising efforts. Working within their own communities to go "this is something I feel passionate about to fundraise for you". We're eternally grateful for all of that, but also really having the videogame industry step up - there were some developers and companies who also showed their support financially to help us continue to be here.

Part of the Videogame Museum’s mission is around establishing video games as culture. It shouldn't be its own separate thing, games are just as valid form of medium as film, as photography, as all those other things. So to have both the general public, but also the industry, recognise that is really important to us because it means that our message and our mission is getting out there. I think the success of that campaign was really a testament to the support from that community, both Sheffield and then the wider UK community, about how relevant the organisation is and is going to continue to be in preserving that history.

“...to have both the general public, but also the industry, recognise that is really important to us because it means that our message and our mission is getting out there”

What's the most important lockdown lesson your organisation learned
that will serve you into 2022 and beyond?

The starting point was almost that our staff, our workforce, our team, they're our strongest asset. They're not just where all the amazing creative ideas come from, but they're also very much the life of the organisation. So we've been working really hard as lockdown has continued and through this year to really work on how we can make sure that we're not just doing duty of care, but going above beyond, that we are forming that team and that family that help drive all our projects forward. It's been an interesting year for everybody. You know, both personally and from a work perspective. So making sure that we're kind of considering people on the ground has been really, really important.

“...our staff, our workforce, our team, they’re our strongest asset. They’re not just where all the amazing creative ideas come from, but they’re also very much the life of the organisation”

The other thing is with digital. We were really, really excited to win the Esmée Fairbairn grant through the Museum Association to do the Animal Crossing Diaries. That's just launched in September to an exceptional reception. It's been really, really great. It's our first step into collecting videogame playable experiences. That kind of ephemeral idea that each one of us will play the same game in a different way. I think we really want to build on that idea in terms of user-generated content across a lot more projects. In tandem, the fact that we can do digital and do more digital to reach a broader audience. Not everybody who gave to our crowdfunding campaign had ever visited the museum. There are people out there who believe in the idea without just being a visitor, so we want to do things that can reach them with our work, but also then try to balance and get that hybrid. Because actually, as we worked on Animal Crossing throughout 2021, we realized that actually, we need to offer something to people in our space and our base in Sheffield, as well as online. So we're really trying to embed that kind of hybrid model through our work. So fingers crossed we can do more of that because that'll be really super exciting.

“...there are people out there who believe in the idea without just being a visitor, so we want to do things that can reach them with our work”